I really really really wanted the joystick for this game! So I entered the competition to win one. I had to design a character for the Capcom Vs. series fighting games. I figured it'd be judged by men so I went with the hot chick angle. Most of the entries thus far are all generic anime guys with troubled pasts looking for some kind of revenge, some even with big swords. I knew I didn't want to take this route. 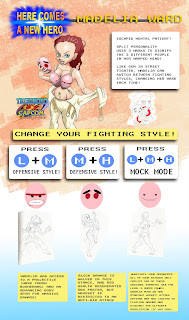 I always loved the idea of Gen from the Street Fighter Alpha series and Street Fighter IV. You could hit all three punches or all three kicks and he'd change his stance, giving you access to completely different movesets. I wanted to extend this to 3 stances, one for offense, one for defense and one to take the piss out of your opponent (like Dan. It's such a great idea, having a character to show off how good you are that you can win with such a weak character with more taunts than actual moves)
That got me thinking, what kind of person would have these three separate fighting styles? Someone with a split personality! The mask idea was to give a visible cue to the change. I originally had her store the spare masks on her back, but after a conversation with a friend I came up with this far more pervy idea. I didn't really want to do the whole sexy girl thing, but was talked into it! I WANTED TO WIN DAMMIT!
Well, I did win, came third, meaning I got the stick, a copy of the game and a signed poster. Pretty damn awesome, there was some stiff competition
Posted by Ricky Earl at 04:32 3 comments: