This was it's standing on the first morning... 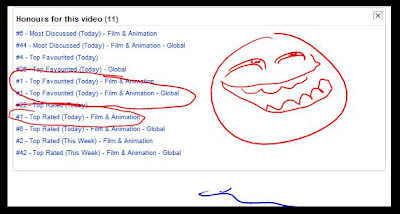 After only a few hours, I thought this was pretty amazing, but it went on to do much more.
There was a time when it was the #1 top favourited video in film and animation for the month, and at one point, it had over 50 honors (unfortunately I failed to get a screen grab at that point).
the film now stands at way over half a million views, with over 17,000 "likes" and over 3,000 comments. I think that's pretty good for a 10 minute long beat poem!

I still find it absolutely amazing that we are living at a point in time when you can make a respectable looking film at home. A few of the shots that you see in Storm I made on my crappy old PC, that threatened to choke and die every time I tried to preview what I'd done. The space shot and the one that precedes it for example.
DC asked me to make it look as appealing/beautiful as possible. As he asked this, I knew I wanted to include a penumbra, which also meant working out how to do it (luckily I'd already been thinking about it for a while and wanted an excuse to try it out) 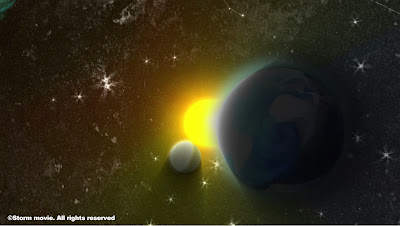 Its actually really easy (create a duplicate of what ever you want to cast a shadow, make it black, then add a radial blur (on zoom). There. That's the only trick I've got up my sleeve. Now everyone knows how I did it. I guess I'll be unemployed now.)

I'm still working with director DC Turner at the moment on something new, which I'll be able to post about later in the year.

Until then, I'll try and post some blog posts that I plan to do for fun...
Posted by Ricky Earl at 11:33 No comments: