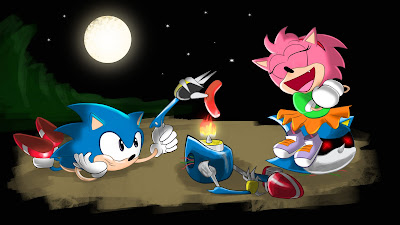 The Sega Blog just ran a Sonic CD fan art comp. The rules were simple, depict a scene using the Mega CD game, Sonic CD, as a basis. Here's my entry which won me a copy of the game (which has just been re-released on XBOX XBLA) and a soundtrack CD.
I knew I only had one evening to do my entry, so I had to work fast. I was sketching a few ideas, and drew this little action scene (below). I knew from the start that I was definitely going to use Amy Rose and Metal Sonic, as they both made their debuts in the game. I was about to start cleaning up this image when I decided against it. I figured there'd be a truckload of entries all looking the same, with Sonic racing or running away from Metal Sonic. 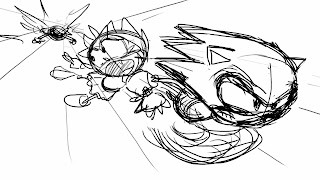 I couldn't bear the thought of having the same image as 100 other people so I came up with the "After the Battle" scenario (top of page). I hope you like it! Maybe one day I'll spend more than an evening on it and go in and render it properly!

P.S Some of the top prize winners were absolutely fantastic (they get a signed CD soundtrack). Check em out!